Why bank fixed deposits can be high risk too

Update (November 18, 2020): After Yes Bank, on November 17, Lakshmi Vilas Bank has become the latest Indian scheduled commercial bank to flounder, with RBI and the Finance Ministry placing a moratorium on depositors withdrawing more than Rs 25000 from the bank for the next 30 days. RBI has now formulated a resolution plan which proposes merging Lakshmi Vilas Bank into DBS Bank India. The comments and objections from the stakeholders in the two banks are awaited.

Should the resolution plan go through, depositors’ funds in LVB will be fully protected while equity shareholders’ funds will be wiped out. If you’re a depositor in LVB, you should watch out for this resolution plan to be quickly approved, as that could mean early lifting of the restrictions on your withdrawals. This episode once again highlights the uncertainties that can crop up when your money in deposits with shaky banks just because their interest rates are high. Want to know more about what happens when a bank is placed under moratorium? Read on…

The ultra-cautious stance that we have taken towards fixed deposits in our quarterly review has provoked a barrage of queries from our subscribers wondering whether we are missing a trick or two in our deposit coverage. They appear particularly curious about why we’ve kept out the higher-rate fixed deposit programmes from banks, particularly Small Finance Bank in India (which offer 7-7.5%) and financially stressed ones like Yes Bank.

If you decide to park a portion of your deposit portfolio in riskier bank fixed deposit options after fully calculating the risks that can play out, that’s certainly a valid decision. But before you take that call, it is important to know how bank failures actually play out in India. We hope this FAQ helps you make this assessment.

FAQs on bank fixed deposits, their risks, and deposit insurance

Q You’ve asked us to stick to post office schemes because they offer better risk-reward than banks today. Why do you say banks’ fixed deposits are riskier?

Post office schemes represent Central government borrowings and are sovereign backed. Banks, even public sector ones, are commercial entities. PSBs are only partly owned by the Government. Banks do not carry any explicit deposit guarantee beyond deposit insurance. So while your capital in a post office deposit is fully protected, in a bank only a part of your capital is protected.

Q That’s a theoretical argument isn’t it? Banks are never allowed to fail in India!

Banks are very much allowed to fail. It is just that we haven’t seen any scheduled commercial banks being allowed to fail in the recent past. Numbers from the Deposit Insurance and Credit Guarantee Corporation (DICGC), which provides insurance cover on Indian banks, show that from the inception of DICGC in 1961 till March 31 2020, 27 commercial banks and 357 co-operative banks have been liquidated.

Q As long as there’s DICGC, why worry! The deposit insurance cover has been raised from Rs 1 lakh to Rs 5 lakh in February 2020. So why can’t I park upto Rs 5 lakh in banks offering higher fixed deposit rates? If the bank fails, I’ll anyway get the insurance money.

Yes, but you are likely to get it after a multi-year wait. History tells us that there’s usually a long delay between the time a commercial or co-operative bank lands in trouble and it gets liquidated and its depositors’ claims get settled. In FY20, the DICGC annual report tells us, it took 508 days for the depositors of de-registered banks to get their first set of claims (that is claims settled in FY20 were on an average 508 days old). In FY19, the claim settlement period was 1425 days (after the bank was deregistered). In FY18 it took 2075 days or 5-plus years.

The report mentions that claims for a bank deregistered in 2003 were settled only in 2017. While the DICGC tries to pay the claims received from bank liquidators within a couple of weeks, liquidators can take a lot of time to take stock of a bank’s assets and liabilities and to prepare the list of eligible depositors.

In FY20, the DICGC annual report tells us that claims settled in FY20 were on an average 508 days old.

Q So many claims do not get settled then?

Yes, numbers suggest so. In the nearly 40 years from 1961 to 2020 (March) the DICGC has settled just Rs 296 crore in cumulative claims towards 27 liquidated commercial banks and Rs 4903 crore in claims towards 357 co-operative banks that went bust.

To do a ballpark calculation, this works out to just about Rs 11 crore in claims per commercial bank and Rs 14 crore per co-operative bank. This is surely a fraction of the deposit base of the banks that have been liquidated. To put this in context, the value of commercial bank deposits insured by DICGC was at over Rs 30 lakh crore and the value of co-operative bank deposits insured at Rs 4 lakh crore in FY20.

Q But commercial banks are usually rescued before they fail, right? Global Trust Bank was merged with Oriental Bank of Commerce and SBI and other banks infused equity into Yes Bank.

Yes, if a floundering commercial bank is merged or acquired, deposit-holders are better off as their fixed deposits get transferred to the acquiring bank. But that’s a big if. Before such a rescue can be worked out, there’s usually a long waiting period. As soon as a bank shows any signs of financial stress, RBI invokes its powers under section 35A of the Banking Regulation Act to issue ‘directions’ to it. These directions, apart from preventing the bank from extending new loans, also place limits on the amount of deposits that each accountholder can withdraw from his or her accounts held in the bank – whether they are savings accounts, current accounts or fixed deposits.

In the case of Global Trust Bank, RBI set the cap on withdrawals at Rs 10,000 per accountholder. In the case of Yes Bank, the cap was placed at Rs 50,000 per accountholder. These directions tend to take immediate effect, allowing you no time to act, because they are intended to prevent a run on a bank. If RBI imposes withdrawal limits on a bank, depositors will be unable to get their hands either on their deposit money or the insurance amount, until the bank is officially merged or liquidated which can take months.

This is quite hard to predict. It depends on how quickly RBI is able to cobble together a rescue package for the bank and get it bailed out. In the case of Yes Bank, the rescue package was ready within a couple of weeks and the withdrawal curbs were lifted on March 18, barely 13 days after they were imposed on March 6 2020. With Global Trust Bank, RBI initially imposed deposit limits for a three-month period starting on July 24, 2004. But the bank was merged with OBC by August 14 2004.

But these quick bailouts are the exception rather than the rule. In the case of PMC Bank, withdrawal limits imposed on September 21 2019 have been extended multiple times and are now in place until December 22 2020, though the initial limit of Rs 1000 per accountholder has been increased to Rs 1 lakh.

There’s a long line-up of co-operative banks where depositor money has been stuck for years because RBI has been wary of relaxing the withdrawal limits because the bank has been unable to come up with a resolution plan. Such cases eventually end with RBI ordering liquidation. The deposit insurance process can kick in only after this liquidation order is passed and the liquidator submits a list of claims to DICGC.

Once RBI imposes a moratorium on withdrawals from any bank, this sends out a pretty bleak signal to the bank’s depositors as well as other investors. This makes it hard task for it to raise funds for a bail out. Lifting the moratorium without a rescue plan in place becomes impossible as this could precipitate a run on the bank. Given that all banks run a highly leveraged business with their loans amounting to many times their own capital, even a sound bank will find it hard to survive a run by its depositors.

The deposit insurance process can kick in only after the RBI passes a liquidation order for the bank and the liquidator submits a list of claims to DICGC.

It could, but not in all cases. In certain cases, where RBI suspects fraud, misappropriation of funds or window-dressing of a bank’s numbers, it does impose withdrawal limits on depositors even before there is public evidence of a deterioration in the bank’s numbers.

Section 35A gives carte blanche to RBI to issue directions, in consultation with the Centre, “to prevent the affairs of any banking company being conducted in a manner detrimental to the interests of the depositors or in a manner prejudicial to the interests of the banking company”. This allows a lot of leeway for RBI to take preventive action through limits on withdrawals, even when the bank’s numbers don’t explicitly signal trouble.

In the PMC Bank case, there was nothing very alarming in the bank’s reported numbers when RBI initiated action. The bank’s last available numbers for March 31 2019 showed a large deposit base of Rs 11,600 crore, a Gross NPA ratio of 3.76% and net NPA ratio of 2.19% were nothing out of the ordinary. Its capital adequacy ratio was 12.62% against the regulatory requirement of 12% and its advances were growing in the double digits.

Q So what is your final advice?

Depositing money in a bank with a recent history of stress, a dicey reputation for governance, known problems in the loan book or a precarious GNPA and capital adequacy position exposes you to the risk of RBI directions, which can deprive you of access to your money for temporary periods.

Even if the bank is nowhere near failing, you may need to budget for the uncertainty and the risk of being deprived of liquidity until the bank is back on its feet. Do evaluate this risk against the rewards of earning 1-1.5% more on a Rs 5 lakh deposit for 6 months to a year – essentially risking your Rs 5 lakh principal for a Rs 5,000 gain!

Useful link: A guide to deposit insurance – from DICGC. 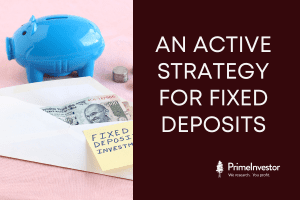 An active strategy for fixed deposits