Mirae Asset AMC is developing a passive offering that’s different from other AMCs. A new NFO to hit the market, as part of this passive pipeline is the Mirae Asset S&P 500 Top 50 ETF and FOF that will invest in the ETF. Does this index make for a good portfolio addition?

The S&P Top 50 index is rebalanced annually every June; it was launched in November 2015 but index data has been back-worked and is available from 2005.

We have already explained how international investing is a good diversifier, and that the US market in particular is the better of the options in earlier articles. This S&P 500 Top 50 ETF and NFO adds to those available US options. It’s usability, though, hinges on two factors – the tracking error and whether it provides an alternative to the S&P 500.

Features of the index

The latter question (whether an alternative to S&P 500) above arises because the S&P Top 50 shares similarities with the S&P 500. Not only are fundamental metrics such as PE/PB ratios very close to each other, but their performance is as well.

In our own markets, the Nifty 50 and the Nifty 500 behave very differently in terms of returns and in characteristics such as volatility and downsides (we’re not getting into a discussion here about the differences between the Nifty 50/500 and the S&P 50/500 indices).

Average long-term returns for the S&P Top 50 and the S&P 500 are similar. As per data provided by the NFO documents, the 3-year average return over the past 10 years for both indices works out to 19%. In shorter 5-year periods, the average return differential is less than 2 percentage points.

It is in recent times that performance between the two indices is starting to diverge. As the earlier graph shows, the S&P Top 50 spikes from around 2020 onwards. This can partly be attributed to the stupendous rally in the top index constituents, which are tech-heavy. As with our own markets, the top index weights contributed significantly to rallies in years such as 2019. The current rally too, while broad-based, has still seen soaring returns for the top stocks. This could have magnified the S&P Top 50’s returns owing to its comparatively more concentrated holdings. Considering different rolling return periods over the past ten years do not show too much outperformance of one index over the other.

The table below shows the calendar returns of the two indices. While the S&P Top 50 has some edge over the S&P 500, the return differential is insignificant in most cases, except in 2020 due to reasons explained above.

In terms of return volatility, the S&P Top 50 and the S&P 500 are almost exactly alike across timeframes. However, on downsides, the S&P Top 50 is a shade better than the S&P 500. On a 3-year rolling period, the S&P Top 50 hasn’t slipped into losses while the S&P 500 has a few instances with a loss of about 1.5%. Neither index delivered losses for longer 5-year periods.

Whether the current outperformance of the S&P 500 Top 50 will continue or expand is hard to predict now and will be known only over time. Going by past performance, the index does not offer a differentiated bet from the S&P 500. Therefore, the following points hold for the Mirae Asset S&P 500 Top 50 ETF:

However, what bears watching is the tracking error of the Mirae Asset S&P 500 Top 50 ETF. The FOF will be investing in the units of the ETF. The AMC’s other US-based ETF, the Mirae Asset NYSE Fang Plus ETF has seen a good amount of divergence between its market price and the underlying NAV of the ETF. Volumes have also been erratic, starting out larger but cooling off a bit lately. If you want to invest in the Mirae S&P Top 50 ETF, it's best to start small and take a call based on how tracking errors and volumes play out.

International funds – what are your options now? What should you do with your international funds? 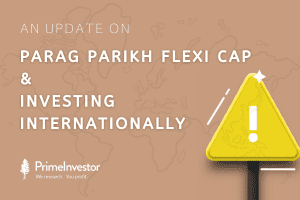 An update on Parag Parikh Flexi Cap and investing internationally